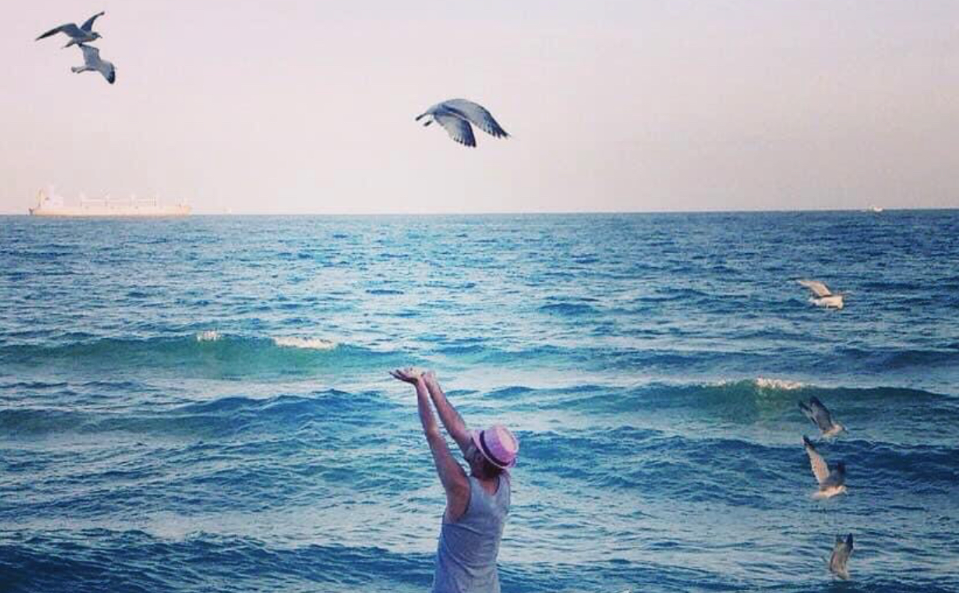 Get an aphorism from Yahia Lababidi texted to you every day!

Yahia Lababidi is the author of ✨✨Desert Songs✨✨ & 🤲🏼Learning to Pray📿 as well as 9 other books of poems, aphorisms, essays & conversations.

Lababidi has been called “perhaps our greatest living aphorist.” He has been writing aphorisms for three decades, since he was a teenager, and now his words words go viral, are used in classrooms and even religious services.

"Aphorisms are an ancient form, but its current-day master is Yahia Lababidi."

Demo
To give birth to God, the self must die in the delivery room.
The over-examined life is no more worth living than the unexamined.
Whoever speaks definitively speaks prematurely.
The shoreline is where opinions should be etched.
The application of wisdom is no less difficult than its acquisition.

"Yahia Lababidi’s work is characterized by a contemplative tone in line with Rumi, whom he often quotes. Lababidi is a Muslim voice for peace, celebrating the wisdom in ancient traditions and pointing out the ridiculous in the rush and cynicism of contemporary life.

Drawn to the mystic tradition, he often refers to the virtues and fruits of silence, and writes that his aphorisms “respect the wisdom of silence by disturbing it, briefly.” Perhaps an age as thoughtless and noisy as our own requires a whole book full of them."

🙏 A daily moment of meditative reflection

Take a moment every day to reflect on life, purpose, and wisdom.

We forget to read books and are inundated with email lists and app notifications that are easy to ignore. The text message format is an uncluttered medium to prompt daily reading without having to remember.

Yahia Lababidi is the author, most recently, of Desert Songs (Rowayat, 2022) & Learning to Pray: a Book of Longing (Kelsay Books, 2021). Prior to that, Lababidi published Revolutions of the Heart (Wipf & Stock, 2020) a genre-bending collection of essays & conversations. He is, also, the author of 2 critically-acclaimed books of aphorisms: Signposts to Elsewhere (2019) and Where Epics Fail (2018). Featured on PBS NewsHour, Lababidi's short meditations were generously endorsed by President Barack Obama's inaugural poet, Richard Blanco, who wrote: "Aphorisms are an ancient form, but its current-day master is Yahia Lababidi." Signposts was selected as a Book of the Year by The Independent (UK) and issued by Hay House, publishers of Deepak Chopra, Dr. Wayne Dyer and Marianne Williamson. Lababidi, Egyptian-American thinker/poet, and author of 5 other well-received books of poetry and prose, has been invited to speak at Oxford University and NPR as well as being featured in Best American Poetry, World Literature Today, On Being with Krista Tippett, The Guardian and Al Jazeera, among several other esteemed cultural outlets. Lababidi's BALANCING ACTS: New & Selected Poems (1993-2015), published by Press 53, is a celebration of more than twenty years of his poetry. According to Chard deNiord, Poet Laureate of Vermont, it 'resonates in plain-spoken yet dazzling poetry--sometimes epigrammatic, sometimes expansive--that betrays the eclectic transmissions of Lababidi's myriad influences, from Rumi to Kierkegaard, Dickinson to Kafka.' Also by Lababidi is an eclectic collection of cultural essays, TRIAL BY INK: From Nietzsche to Belly Dancing as well as two poetry volumes, FEVER DREAMS and BARELY THERE, a collection of his shorter verse, much of which was inspired by the constraints of social media and touches on the life of the spirit. Along with Alex Stein, he is also the co-author of a genre-bending book, THE ARTIST AS MYSTIC: Conversations with Yahia Lababidi. Lababidi's work appears in numerous anthologies, including Short Flights (Schaffner Press, 2015) a unique anthology that draws together the work and musings of 32 leading pioneers of short-form writing, or aphorisms. He is the only contemporary Arab writer in the encyclopedia: Geary's Guide to the World's Great Aphorists, and the youngest poet included in the best-selling US college textbook, Literature: an Introduction to Reading and Writing (10th edition). Lababidi was one of twenty-two powerful voices, from poets and novelists to actors to take part in the activist anthology: Small Blows Against Encroaching Totalitarianism Vol. 1 (McSweeney's, 2018). He is also one of around a dozen distinguished artists and thinkers featured in the anthology, Masks: Bowie & Artists of Artifice (Intellect Books, 2020) alongside artists and thinkers such as: Slovenian philosopher, Slavoj Žižek and Rock and Roll Hall of Fame inductee, Gary Valentine (founding member of the New Wave band, Blondie). Nominated for a Pushcart Prize, three times, Lababidi's writing has been translated into several languages, including: Arabic, Hebrew, Slovak, Spanish, French, Italian, German, Dutch, and Swedish. Otherwise, several video-poems based on his work, have been shown at film festivals, worldwide, while he has participated in international poetry festivals throughout the USA, Europe and the Middle East. Lababidi was chosen as a Juror for the 2012 Neustadt International Prize for Literature – a biennial award widely considered to be the most prestigious international literary prize after the Nobel Prize in Literature. For more information, please visit: http://www.pw.org/content/yahia_lababidi To hear Yahia Lababidi read some of his favorite poems, please, visit his Soundcloud page.

Taking a moment each day to step back from day-to-day activity for a bit of peace and contemplation can reduce your anxiety, exercise your mind, and focus your decisions on your true priorities.

We forget to read books and are inundated with email lists and app notifications that are easy to ignore. If you're serious about incorporating mindfulness into your daily life, the text message format is an uncluttered medium to prompt daily reading without having to remember.

Yes. The first 7 days are free.

No. All payments are securely processed via Stripe.com (which handles payments for companies such as Lyft, Zoom, Instacart, and more). Our Stripe records only contain limited information (e.g. last four digits, zip, etc.), but we can’t see your full credit card number or information.

Not currently. But please email payments@dailywisdomtexts.com if you are interested in this.

Not currently. But please email payments@dailywisdomtexts.com if you are interested in this.

Please review our Refund Policy and if you believe you qualify email payments@dailywisdomtexts.com in accordance with our policy.

Simply text back ‘unsubscribe’ in reply to any text, SMS, or MMS we send to your phone number to cancel your subscription. Please email payments@dailywisdomtexts.com if you have any questions or issues.

Currently only English. Please email any requests for other languages.

Yes. Update your subscription by texting back with your preferred hour (in 0-23 format) and time zone abbreviation. For example, "update time 13 pdt"

You can learn more on Yahia's Goodreads page

You can purchase them on Amazon.com, Barnes & Noble, Alibris, BookDepository.com, ThriftBooks, Powell's, AbeBooks, Bookshop.org, or many local bookstores.

This is a collaboration between Yahia Lababidi and Daily Wisdom Texts.

Taking a moment each day to step back from day-to-day activity for a bit of peace and contemplation can reduce your anxiety, exercise your mind, and focus your decisions on your true priorities.